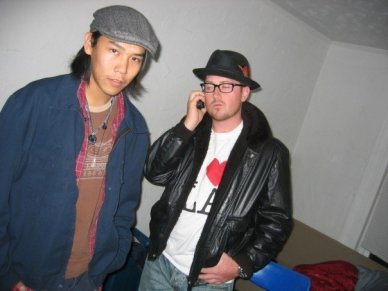 The Pteradons are a hip hop crew that was comprised of Greg Large and Vov Abraxas.
Originally just freestyle buddies, the group formed in 2002.
The war on terror had just begun, and people were already beginning to speculate that it was a war for oil.
Inspired by this, they became The Pteradons; oil being just the crude eroded break up of dead dinosaurs it felt suiting to create a project that alluded to, but not explicitly point out the circle of life and the dystopian world we live in.
Nuances would develop throughout the era of The Pteradons, they would rep a fictional place called Pteradonia, which was supposedly a province of the landmass called Pangea.
Pteradonia was always in a state of collapse, and Pangea, barely mentioned, was the global order stringing it all together.
All of this was only slightly known to the two main characters that would make up The Pteradons,
the music doesn’t paint this portrait of a failing state, but just exists within it. Here are a couple characters who are simply living out their lives in this dissolving universe. Trying to get by, trying to be someone. Trying to find love, whatever.
The era of the Pteradons exists in suspended animation, the perpetual end times of 2012 BC.

Greg passed away in 2011. He was 33.
Devastated, Vov Abraxas took the producer role, and strung together thousands of soundbites and recordings that spanned across their friendship and put together the first posthumous Pteradons album called “Y A R D W O L V E S” named after a fictional crew Greg was intending on writing into a movie.
https://vovabraxas.bandcamp.com/album/y-a-r-d-w-o-l-v-e-s